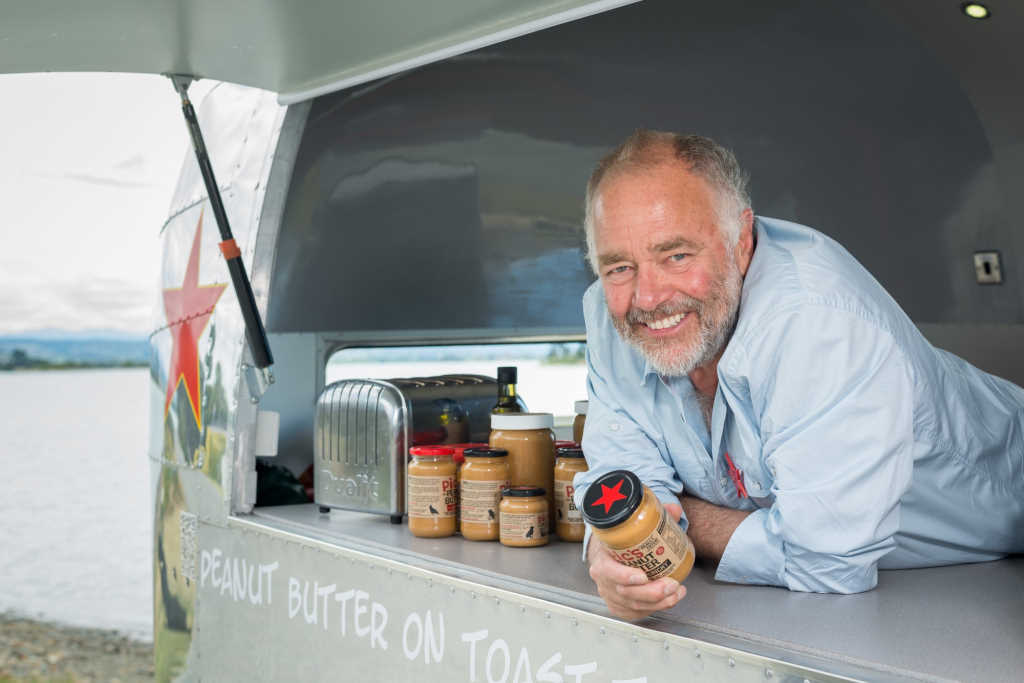 As Macular Degeneration New Zealand turns 10 this year, Jai Breitnauer spoke to three wet MD patients who have benefited from the organisation’s support, to find out about their experience of diagnosis and what life’s like for them now.

Pic Picot, “MD has made me a better business person.”

When Pic Picot bought a concrete mixer and began making peanut butter in his Nelson garage, he had no idea just how well the product would take off.

“I sold my first jar at the Nelson farmer’s market in October 2007,” says Picot, who has previously run many businesses, from graphic design to a sailing school. “Making peanut butter was a hobby to provide pocket money for the weekend, I had no exit strategy.”

Picot already knew that he had macular degeneration when he started Pic’s. He knew that one day there would be things that he would be unable to do, and that filled him with trepidation.

“In the past, with my businesses, I did everything,” he says. “Software, graphic design, tinkering with machinery…I didn’t trust anybody else and I’d never worked with others as a team. I worried that other people wouldn’t do things the way I did them.”

“I had to delegate. It was hard at first, but I had no choice but to let go,” he says. “It’s been a huge benefit. It turns out other people are just better at some things than me! As my eyesight has deteriorated, my business has grown exponentially – those two things are directly related.”

Picot found that while he wasn’t worrying about the accountancy software or fixing the machinery, he had more time for the bigger picture, leaving niche areas to those with expertise.

“People don’t do anything the way I do it,” he laughs. “They do it their own way, and that’s often better. I’m very hands-off these days, but I provide direction.”

Picot loves being the ‘face’ of Pics, meeting people and making sure the core values of the company inform all decisions. Letting go of the day-to-day has allowed space for the business to find success.

“This business has grown so much so quickly and it’s because I had to get other people involved. I’ve let go of so many things I cherished, but I’ve realised the incredible value of being able to step back and find my own niche.”

“I was referred to a specialist to have regular checks. It was during one of these appointments in 2013 that he noticed the signs of macular degeneration,” he says.

Klap notes that although it was upsetting to discover he has wet MD, he was happy it had been picked up.

“I was pleased it was discovered at an early stage. He also did cataract operations on both my eyes,” says Klap. “I feel it’s just one of those things that happens when you get to a certain age. But I have not let it impact on my life – although I do need a strong light to read and I sit closer to the TV now.”

Klap says that ageing can be stressful and there are many things to worry about such as Alzheimer’s.

“However, it is necessary to try and be positive in mind and body. I swim regularly and go tramping, although I admit I have given up skiing now.”

Although he doesn’t like having the injections, Klap says it is better than the alternative. An active, independent 92 year-old who is heavily involved in community activities, Klap cannot even entertain the idea of losing his sight.

“I now see the specialist every three months, but if I see a wobble in reading lines, and a slow deterioration in my sight, then I see the specialist immediately,” he says. “I’m comfortable having regular check-ups, and reading tests put me well above the driving licence line. When I asked my specialist if I’d still be driving at 100, the answer was positive. But he could not guarantee 110!”

Klap says he cannot emphasise enough the importance of early diagnosis, and treatment compliance. He agrees optometrists have a role in referring people and advising them on lifestyle changes.

“The sooner patients consult an expert and start treatment, the better. I know several people, including my sister, who are now blind or nearly blind because they left it too late.”

Shirley Benton, “My optician is amazing!”

In 2013, Benton went to see her usual optometrist at Total Vision East Hamilton, thinking she might need new glasses. Her optometrist had just been to a seminar with David Worsley about Drusen and recognised the signs.

“He explained it was a type of macular degeneration, and he called Dr Worsley right away, who said I was a candidate for a new laser treatment.”

Benton’s Drusen has never developed into wet MD, but it has progressed to a point where she is visually impaired.

“I had laser treatments with Dr Worsley every six to nine months, for four years,” says Benton. “It’s the only treatment for dry MD and it definitely helped. My medical insurance paid for part of the treatment, but I still had to pay out a good sum. But what price do you put on your vision? You only have one pair of eyes.”

“People say, ‘Oh! That’s terrible!’ but I think I’m lucky. I’m healthy and active with no other disabilities. I’m glad it’s happened now while I’m still able to do things for myself and put things in place for the future.”

Benton got plenty of offers of help from neighbours and friends. However, she is determined to maintain her own independence.

“Dr Worsley helped get me registered with the Blind Foundation, who did an assessment at my home and supported me to use public transport, as I can no longer drive.”

With a bus stop right outside the door and regular services, Benton finds she can go anywhere in Hamilton, with only a short walk from the bus stop to her destination.

“My vision is very blurry with a black spot in the middle. I find I can only see the outline of things,” she explains. “But if I need to cross the road, I just get my folding white stick out and stand at the side. Cars usually stop for me.”

“It’s a big change, but I’ve got a positive attitude. I decided when it happened that I would not give up anything, and I haven’t. I’m coping well.”

Much has progressed in the 10 years since Macular Degeneration New Zealand was established in terms of available treatments. There are now options to slow the progression of both wet and dry MD, if the condition is diagnosed early enough. Lifestyle and dietary changes have a positive impact, and all patients over 55 should be given an Amsler grid to help them self-monitor their macular.

Optometrists play a vital front-line role in detecting and referring at-risk patients. If in doubt, send your patient to the specialist. Once a patient has been diagnosed, don’t forget to refer them to MDNZ for the additional support and information they need to continue living a full life.